Inspired
A Poem for Braedwyn from Montserrat
Nicole

This was written by a friend of mine from my Paris days. She sent it to Braedwyn a few days after he died.

Where are you now voyager?


Blown from earth by the mouth of Volcanoes,
you flew by ancient wind paths traveled by birds of all species.
When they saw one so little, they nestled your small body
under their wings with grace,
feathers so warm, like a blanket of Mommy and Daddy... 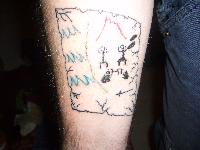 Nicole and I had talked about getting memorial tattoos shortly after Braedwyn had died. After arriving in Bangkok, we met with an old friend, Gar, who is heavily tattoed and asked her advice on who we should see to get them done. She suggested Neng, and over the next couple of nights he put together the design of my tattoo based on what I had scribbled on a napkin at the bar.

I had been reading The Book of the Hopi over the previous week or so and had decided that I wanted something that looked like the Hopi petroglyphs found all over the Southwest (and beyond) that marked important moments in the life of a clan...

more
A Poem by Chris
Gregor

Nicole and I met Chris, a 20 year old from Australia travelling in Thailand, a week ago at a little bar down the street from where Paradee works. We ended up hanging out for many hours and eventually the conversation turned to Braedwyn. He told us when we met up again a few days later that, after we left, he felt Braedwyn's presence and was inspired to write the following poem:

Caught between heaven and earth
A kiss of life, a promised birth.
A thousand years not enough if any
A single lifetime proved one too many...

Papa Joe and I have been creating a special corner of our backyard in memory of Braedwyn, the avid gardener. There's a purple clematis vine, a pot with a red rose and some pansies, a pot with a miniature cherry tree, a small pot of bluebell bulbs and small crystals – clear quartz, rose quartz, blue lace agate, banded agate and amethyst – also a boxwood bush. We've been working on it this week and have completed everything today. It has occurred to me that its completion coincides with the Fall Equinox, which is today {9/23}, so that feels very appropriate...